An Alternative Night Out in Bangkok 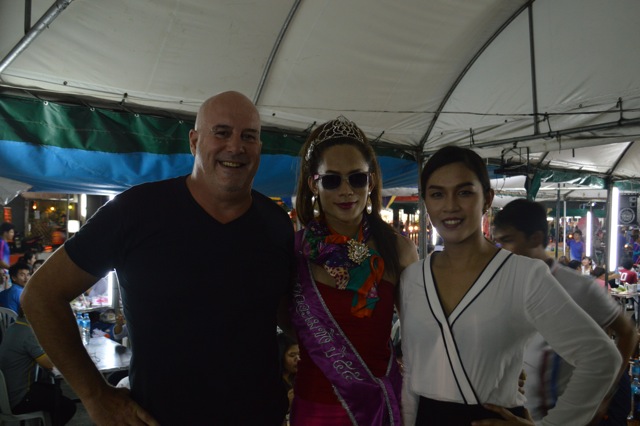 If you have been to Thailand or even if you haven’t you have probably heard a lot about Thai Ladyboys; some good and some bad but probably all interesting.
Some of the negative reports you may have read are no doubt true. Some are not or are only reporting the ‘truth’ from a singular point of view.

In general the red light areas of Bangkok are not places where you are likely to meet a representative sample of Thai people. Cities like Pattaya, even less so. This is also the case as regards the Ladyboys you may see or even meet in those types of places. Despite superficial appearances Thailand is a very conservative country both in manners and appearances.

The news media tends to report on cases of violence and theft far more than acts of kindness. Ladyboys suffer a bad reputation earned for them by a certain demographic but often the focus on bad deeds are rooted in homophobia and prejudice even in an ostensibly tolerant society like Thailand.

To make a balanced judgment or even see the world as it is rather than we are often told it is we need to seek out the alternative experience.  If yours has largely been in the permanent midnight of the entertainment venues in Thailand or on Kho San road and in Silom you may not have seen Thailand in all it’s glory.

You may have noticed Ladyboys around you in shops, banks and restaurants but that is coincidental. While seeking an alternative view of Bangkok and its Ladyboys may not sound like a fun night out, think again!

Experiencing something a little out of the ordinary can be rewarding so I urge you to take a khlong boat (map here, halfway down the page), grab a Bangkok taxi or jump on the Sky train (map below) and make your way up to Ramkhaemphang tonight. 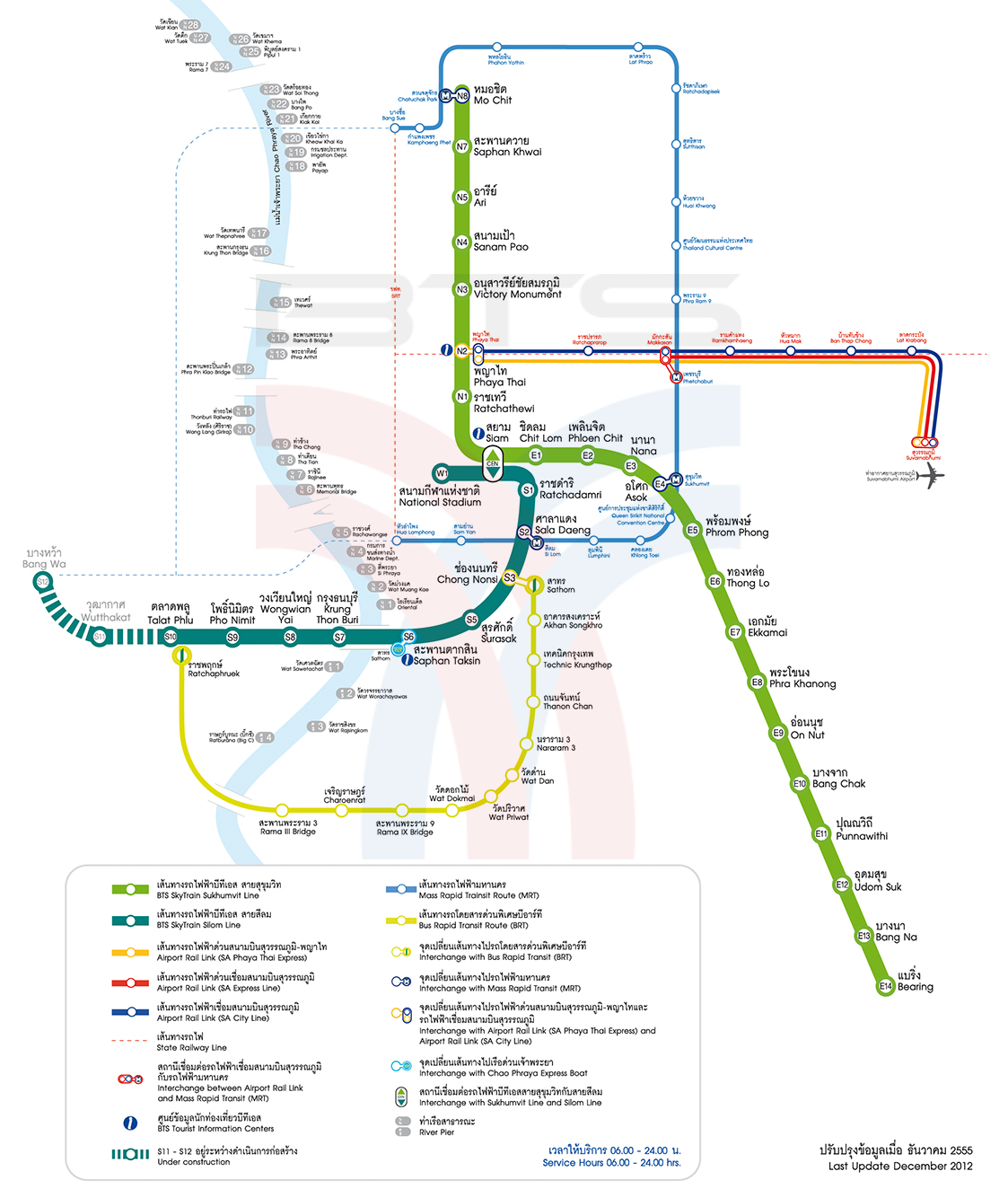 Several years ago I was taken to a car park next to an enormous civic facility thrusting into the skyline in the northern suburbs of Bangkok. It was not to be murdered by the mafia, I have avoided that fate so far, it was to eat seafood in a very unusual restaurant.
Back in 2010 the restaurant at Rajamangala looked exactly as it does now but the servers and the whole approach was very low key and it is interesting to see how this aspect of the restaurant has changed perhaps due to the higher profile and interest in Thai Ladyboys. Ladyboys feature prominently amongst the lists of tourist attractions in Thailand.
Getting to this amazing restaurant is a major event that needs planning and a degree of patience. The Thai people say, ‘Jai Yen Yen’ which means, ‘keep a cool heart’.
The civic building is actually a sports stadium called Rajamangala and is bounded by several major roads.

Giving and listening to directions is so tedious and personally I posses only the capacity to listen to or read about three sentences before I start looking for the exit so I will try to be brief. A more detailed set of alternative modes of transport and directions can be found here.

If you come via the Airport Link from Phya Thai BTS station to Ramkhamhaeng station on the road of the same name then you need to be careful about ensuring the taxi you take to the stadium takes you to the correct side of Rajamangala Stadium. The  Airport Link is the horizontal, easterly running navy blue line on the map and the station you should disembark is Ramkhamhaeng. Known to Thais as a student area, Ramkhamhaeng is also the locale that houses hundreds of poor foreigners who eke out a living as shopping mall teachers in the suburbs of LadPrao and Bangkapi. It is also the home of a pretty special restaurant.

The seafood restaurant is on the side of Rajamangala Stadium that is bounded by Ramkaemphang soi 24 or ‘ezip see’. Look for the sign for the San Fran restaurant on the right hand side of the road next to the Bangkok Inter Place hotel. 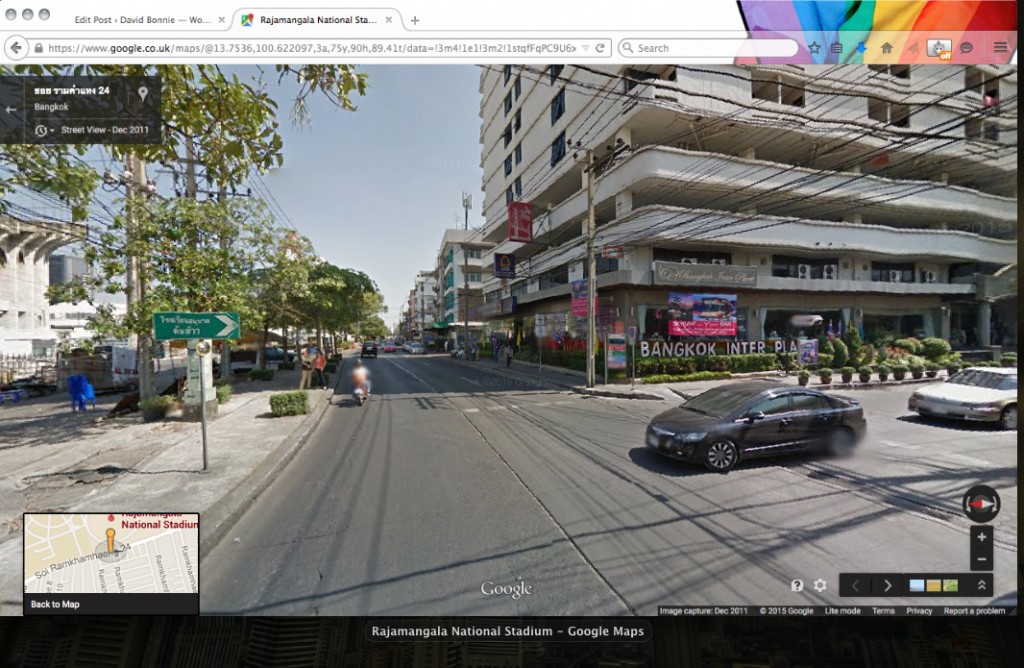 Tell the taxi to stop about here and about 20 metres further along 24 on the opposite side of the road you will see the entrance to the stadium and at night, the restaurant. 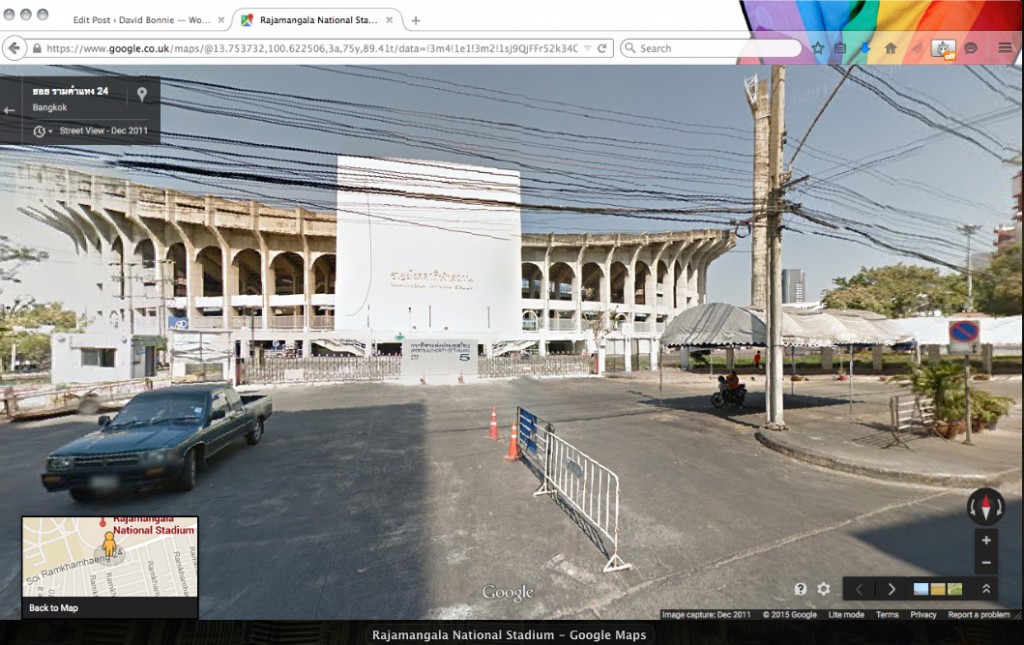 The restaurant is actually in the car park. During the daylight hours it does not look much like a restaurant but after dark a transformation occurs which is fitting, in a way! 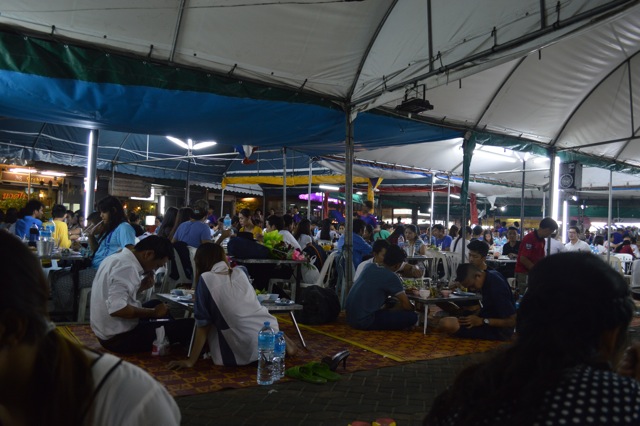 As soon as you enter you will be met and seated by a hostess. This is a new wrinkle on the uniform fetish that lots of Thai people have. Even civil servants dress like military leaders here. There is a choice of seating available these days and there are standard tables and chairs or the more relaxing low rise seating! Large mats are laid on the concrete and various smaller mats are placed around low level tables. This arrangement is surprisingly comfortable. The restaurant is also covered these days which will be a relief during the rainy season! 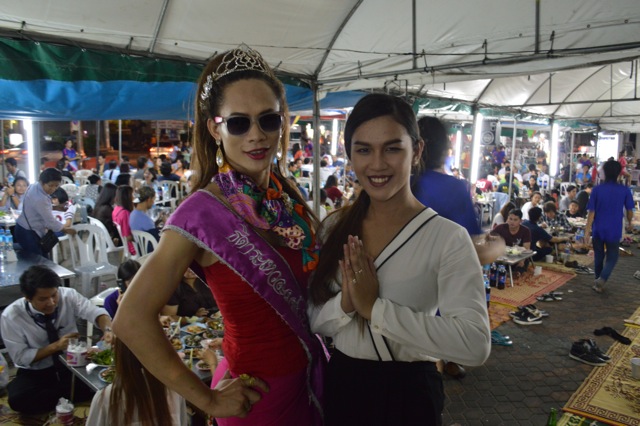 On my previous visits most of the waiting staff were Thai ladyboys and in that nothing has changed but the current crop seem a lot more lady-like, for want of a better description. In the past they doubled as waitresses and as  the people heaving great baskets of fish and prawns around so that may explain the difference.

The service is always brisk here despite the restaurant being packed to capacity.

there were four of us and we ordered half a kilo of giant prawns, grilled fish, pork, rice and lots of beer. Our waitress for the evening was a very cute ladyboy named Ball. She comes from Isaan, of course and has been in Bangkok only a short while. She speaks very little English but was very friendly and kind of adorable! Here she is talking to Annie and taking our order. 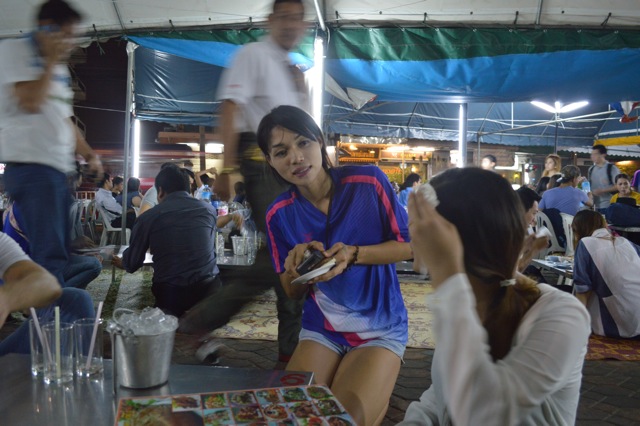 She got plenty of attention from our party and blushed a few times during the evening. 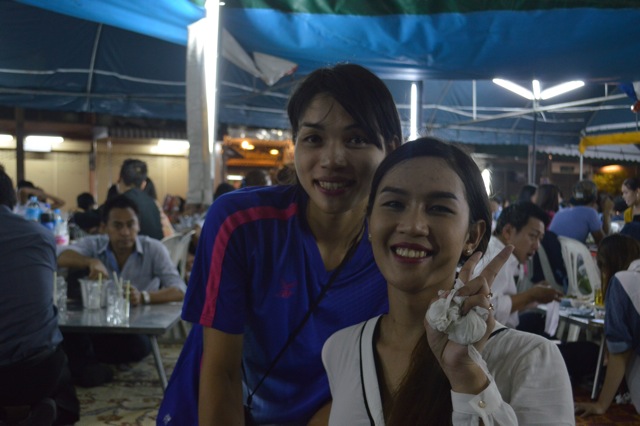 We took lots of photos, got drunk and generally had a ball. Please excuse the pun. I will do it again further down the page for sure! 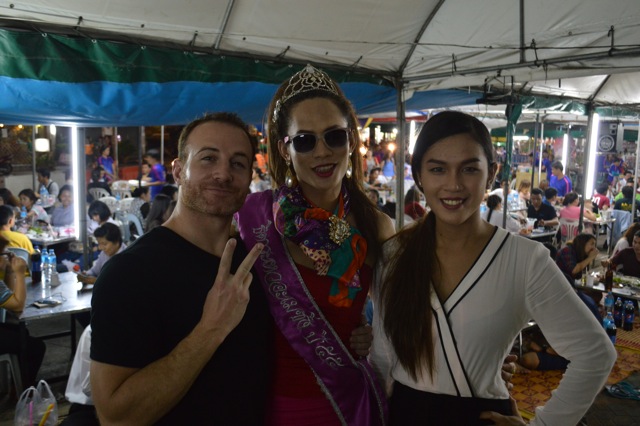 Our friend, back to visit Thailand from China was like a man released on parole! I think he will be making the move back to Thailand when his contract expires . . .unless he discovers Brazil first!

After paying the tiny bill of only 1700 baht we took more pictures and said our farewells . . .phone numbers may have been exchanged but I couldn’t possibly comment! 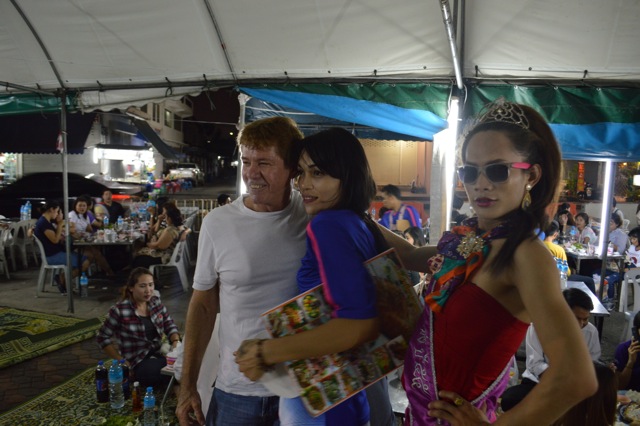 Make a nice couple though, don’t they?

The trip back into central Bangkok was a lot easier than it was to get there largely because we had a sane taxi driver on the way back. Our first taxi driver stopped the cab on the wrong side of the stadium and when we told him to drive around he just sat in the cab and stared out of the window zombie-like in appearance. Consequently we had to walk some way in the heat. You can see Annie mopping her brow in one of the pictures above. she was not inspired by the experience, but got over it quickly as is her way. I still meet people who are fond of saying, ‘I’ve lived here for (insert years) and have never had a problem with a taxi driver’. I think they must either spend so much of their time drunk of high they don’t notice it or they are living in an alternative city!

Back in Bangkok we were invited to a party in Patpong being thrown by the United Nations Development Trust. During their meeting that day in Bangkok the topic had been gender equality and the rights of Thai ladyboys or transwomen had been on the agenda. The party was just about getting drunk. 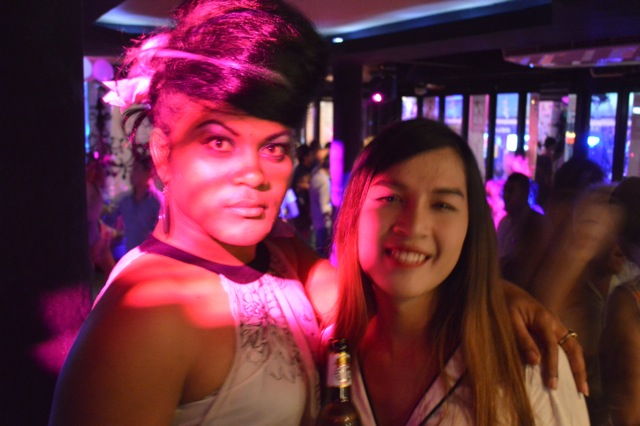 Here is Annie with a very, very tall Fijian transwoman.  I don’t have her number.

So the next time you want a night with a difference, take a walk on the wild side and try something different from the girlie bars, the ladyboy bars, the farang dominated bars of lower Sukhumvit or the backpacker bars. You may just uncover a gem like Ball but even if you don’t you may have one discovering the real Bangkok. Its beauty lies in its diversity and that has to be worth celebrating.