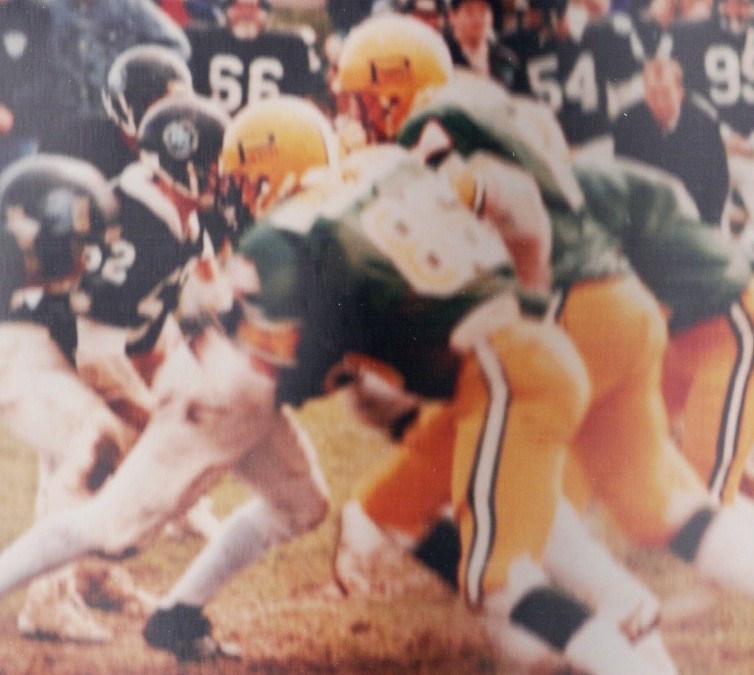 It’s been a lot of years but the memories are still vivid although they are abstract sounds and colours of flashing tangents and collisions at high speed. I did not enter football as an ex-rugby player but as an ex-soldier and athlete. I began helping with the conditioning of a small team in the UK and graduated to plating for better and better teams.

My time in America was mostly spent in Los Angeles, California where I covertly tried to ‘make it’ in football. I say covertly because I was ostensibly there for more practical, sensible reasons; transferred from the UK with a financial giant, C.I.C.A.

Over a period of about 5 years I spent about 3 of them in L.A. After playing in the UK for a big team I went on tour to Australia and the USA with the British team and met the current Raiders team in the Red Onion Bar in Hermosa Beach at a joint press and publicity function. Those guys encouraged me to get a contract with the Raiders franchise, even if I never played, ‘think of the money’, they said. 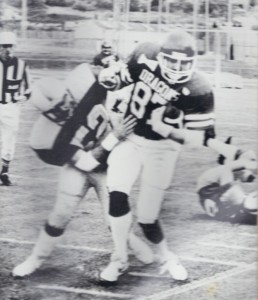 The British team coach arranged for John Johnson the Rams scout to take a look at me and consequently I spent the pre-season with  the Raiders on his recommendation. No contract yet, no money either but I was rubbing shoulders with the ‘greats’. Every day I worked out alongside Howie Long and Steve Smith. I was never approaching good enough but i was heartened to know that I was able to run the 40 in 4.8 secs. That’s probably pretty slow today but in 1989 it was the standard for my position; Tight end.

I made some great catches in practice scrimmages and drills and enjoyed making friends with team members and the hundreds of people ‘around’ the team.

I went to Corkys restaurant every morning close to where I lived on Pearl, Redondo Beach and met Pat O’Neill, the waitress there who became my girlfriend. LA was a fascinating place to live then and pat who was an enthusiastic cyclist was always meeting famous racers when she was out training. It was people like Pat, who was from New york that kept me sane in LA, which I found to be full of fruitcakes who went to work by skateboard. Pat was a really fun girl and I remember her little white shirt and pink bow tie she wore when she was waitressing and her dark hair in a pony tail. She was very bouncy!

Pat’s best friend was an English girl who was friends with Howie Longs wife and because of that and the football connection Howie was pretty friendly and helpful even recommending me to some people in the World League when that started a few? years later.  The keenest memory of him I have is how dense and thick the bones in his legs and arms were! Durability is a major key to success in football and to avoiding injury.

Kevin Florio was another fruitcake of a guy I hung out with in LA. He really believed (more than me) that i had a shot at the Raiders and so was constantly trying to encourage me to introduce his weight and strength management ideas to somebody in power as if i had any influence! His ideas were quite radical then concerning lean muscle mass but today are widely adopted by sports people. Through him I spend a lot of time with bodybuilders in and around Golds Gym. I shredded my body fat and built lean muscle in an intense twice a day training with the raiders and diet advice from KF. I began to be troubled by knee pain and had already undergone cruciate ligament repair surgery which did not work out well. I spent more and more time in a whirlpool at Cal Tech, Compton and one day in practice my knee locked as the chewed up cartilidge started drifting.

I came back to England and had surgery at St. Marys hospital in Bristol to fix the knee. Arthiscopic, keyhole surgery removed the loose matter and i recovered pretty quick but other things got in the way of my return to L.A. Fun, girls and drinking! You have to be so focused to live the life you want and back then, I wasn’t focused enough! I lived the life i thought I wanted instead.

I played a little football in the UK but I found it difficult to take it seriously. When you reach the point in life when you realise that you are no longer progressing, improving and have no goal left that it is conceivable that you can achieve training and playing sport seem a waste of time. I was never going to play for an American team and the teams in the rest of the world were so poor in relative terms, I gave up playing football soon after I returned from the US. Football in the UK died because the Americans involved in the early formation of the British governing bodies were all it seemed out to make money or gain power. The game should have been adapted to suit British tastes. A constantly running clock would have helped and made the game much shorter. Perhaps insisting that there must be at least one passing play every second down would have prevented the game being reduced to ‘3 yds and a cloud of dust’ every play. On the whole though, the people who wanted to play football were more attracted by the uniforms than the discipline of the game often having no previous involvement in sport. They were often sadly lacking in the appropriate physicality. The game has evolved into a university league now but it is not much of a spectacle and does not even compare to a good American high school game. It was fun while it lasted.

The last time I really watched the game avidly was a long time ago. I just bought NFL Game Pass and watched a condensed version of every game in week one of the new season. A lot has changed. I was in Miami once watching the Bengals lose the Superbowl to Joe Montana’s 9’ers. I was with Tim Krumrie’s best mate from training camp (he got cut) who talked pre-game about Tim and how he was gonna do great things . . . .we know how that story ended. When Tim’s leg snapped horribly live on TV his mate went home, pussy!

After watching all the games in week one of the 2014/15 season, the Bengals still suck. I noticed though that there were a lot of blocked passes and wondered if this was because quarterbacks are shorter or defensive linemen taller? There are a lot more black quarterbacks now in contrast to when I was playing and Warren Moon and Randall Cunningham were lonely. There were a lot more flags than I can remember for roughness particularly in the face mask area. The Cowboys look to be in trouble. The quarterbacks, across the board, in all teams, had a lot more time than I remember and theirs, Tony Romo had a lot of time to throw and still couldn’t hit a receiver. The Raiders were disappointing in the same fond way that Birmingham City are disappointing but lots of teams were exciting offensively. Atlanta and the Hawks for two. The 9’ers QB Kaepernick looks a different breed and Carlos Hyde the little rookie running back has a set of wheels. They were stand outs I thought. Pass interference calls were very one-sided and punished the defence for even trying to get involved. Lots of dropped passes; unforgivable. None of the teams i saw seemed to play a timed passing game. The QB’s were all constantly looking for the big play, often getting compromised in the pocket or sacked while they waited and waited for a deep route to get free. A lot of screens and quick swing passes were thrown, 99% of them ineffectual and for a loss and QB’s were signalling with their feet a lot more than I remember.

Watching the games made the memories come thick and fast. Never really talk or think about this episode in my life today and I have never written about or shared it before, probably never will again.

I will just share one memory of trying to make it in practice. The Tight End coach was a guy called Danny Ray Johnson, ‘DJ’ and in the pre-season every rookie only gets so many downs to run plays so you have to hope that the ball comes your way as often as possible. DJ instructed us Tight Ends that when the huddle broke we should look the QB straight in the eye and quickly say, ‘If in doubt, the Tight End will be open, okay’.