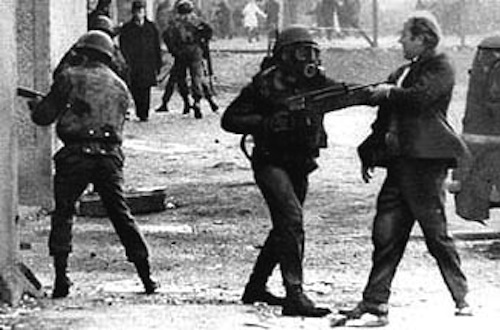 I was sitting there watching Smithy smoke a joint as he lay on his pit. I got the dope from a girl back home. She sent me dope and my father sent me the local newspaper. ‘Leisure centre hosts flower arranging debacle’ that kind of thing. We even used to read it sometimes. I suppose it was comforting to know that the world, however meaningless, carried on, even if we weren’t in it!
The smoke was drifting and curling and we philosophised as the night wore on.

In the weeks before we went to Belfast we had lost three soldiers to accidents, suicide and stupidity. Archer had stolen a land-rover and driven it into a lake when he was drunk, another lad whose name I cannot remember was found dead at the bottom of some backstreet steps in the city and a lad named Brooker when coming home drunk one night decided he wanted a snack. That’s what killed him, not the snack but his attempt to get one. He climbed down the stainless steel flue of a little food stand that sold burgers and hot dogs. When he got inside and turned on the gas he found he had no matches so climbed out again and asked a passer-by for a light. He climbed back inside, lit the match and blew the whole thing sky high. The pitilessly cruel sense of humour of British Toms meant that it was not long before that particular spot became known as ‘Brooker’s Cooker’.

We started hearing ‘The Death Regiment’ in reference to us.

I think those deaths were because we were going to Ireland. We give up part of our morality to go to war. We accept what the army gives us as our morality, our sense of right and wrong. It allows us to survive, it allows us to kill. For some people that loss of ‘self’ is too difficult to bear.
Smithy passed me the joint.
Nowhere to go, nothing to lose. 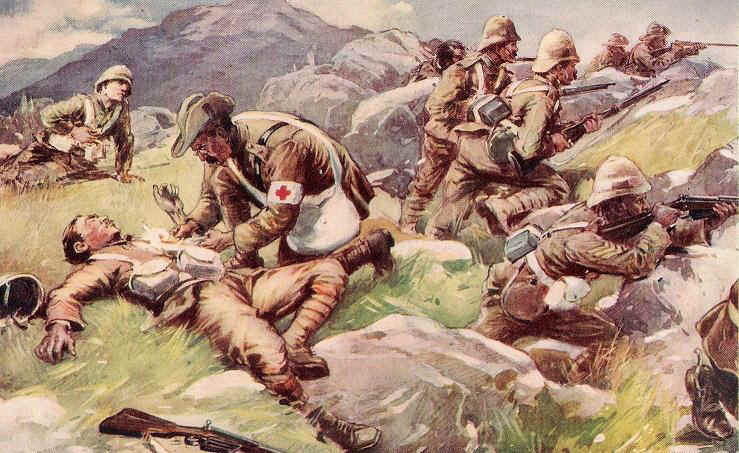 I gave the joint back to Smithy, he takes it and he says . . . . Listen to this man . . . and he played Highway to Hell for the 12th time . . . (He was from Walsall and had been a roadie for AC/DC and whenever he got stoned he tried to tell me how AC/DC where from Walsall too)
We were living inside a dirty little war that no one wants to talk about today in case they offend Gerry fucking Adams.

As that smoke drifted and curled its way into every corner of the room and AC/DC were playing ‘Highway to Hell’ it all made a pattern in my brain that I knew I could never erase. That room, that music, that city with street names whose hearing snatches me back 30 years in a moment would always be with me.

Smithy was rambling about his days as a dog handler; a bomb sniffing dog handler.

Living easy, lovin’ free. .. .season ticket on a one way ride
Asking nothing, leave me be, taking everything in my stride

Smithy says, I loved it, ya know cos It was like me and the dog, you know we had this thing, this partnership . . . any time of day or night we got called out. I had a phone in me room, it was like I was Batman or somatt. Even with all the crap things we had to do, it was as if the dog, well cos he was a dog, well, I must be a man. D’ya know what I mean mate?

Asking nothing, leave me be
Taking everything in my stride

And I said . . . . . Fuck that, I’m carrying that big gun all these months and miles and humping the fucking ammo, before I go home, I’m gonna kill something!
I am sure lots of Toms feel the same; we don’t care what we kill; a Mick, argy, rag head, hajji, or just a cow. 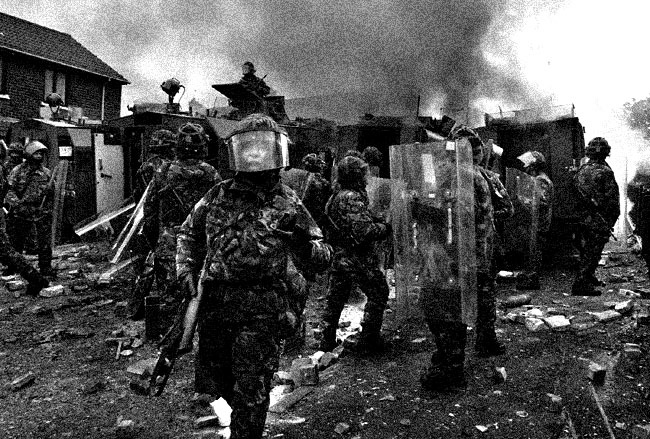 And now we’re both singing because we remember landing in Belfast and the Crab Air stickers everywhere welcoming us ironically to that shithole and the ride in the back of the freezer truck in the dark and having to piss into a T-shirt and someone crying in that dark and the way we had laid next to each other in that lorry.

Going down, party time
My friends are gonna be there too!

Shep got killed on Clifton Park Avenue, Belfast. His death affected his close friends and family, some of whom were in the same patrol deeply. 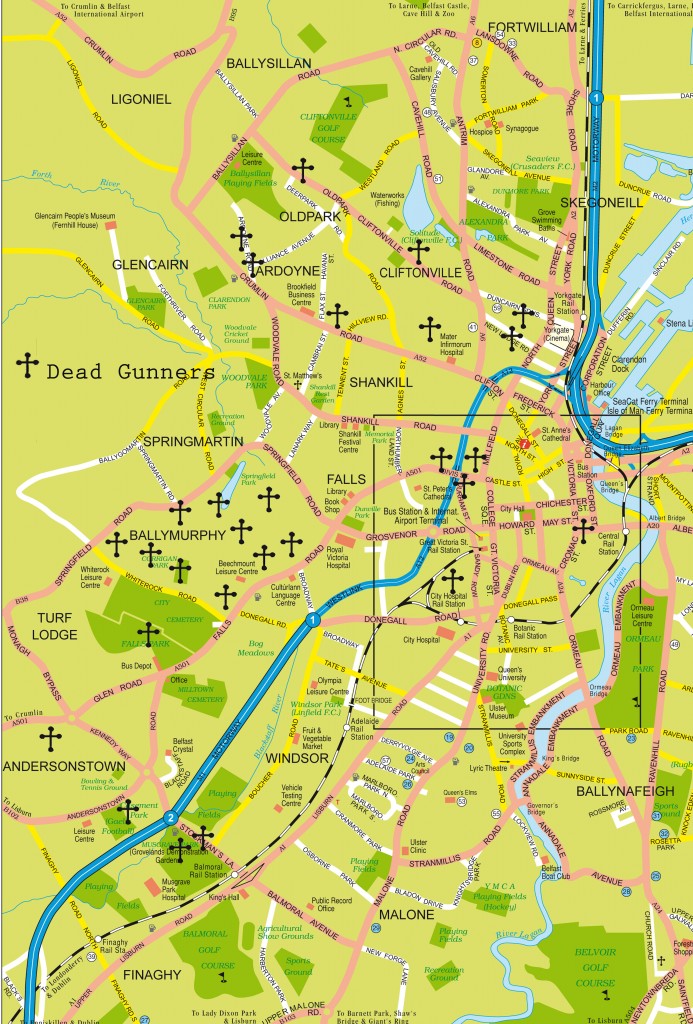 Sounds like a nice place doesn’t it? An avenue definitely does not sound like the kind of place where you are likely to get cut in half by machine gun fire; an American M60 machine gun. The first life lost in the province to that particular weapon. It’s important to know, in the age of international arms deals, who your friends are.

When we next went out on patrol everyone was ticking and tight and thin like fuse wire.

I see a girl walking towards me that I recognise from a previous dark and rain sodden encounter in Belfast. She was a popular and regular visitor at a depressing concrete out-post of the British Empire on the Crumlin road. This Checkpoint was a known target for snipers and rocket launcher attacks and not a good place to be at times…. However it was a magnet for sanger-bangers (girls who like to fuck soldiers on duty). The one I recognised had her hand-bag emblazoned with the cap badges of regiments whose ‘members’ she had blown over the course of their tour.
I turn, walk backward, follow her gaze as she walks past me and smile at her cos she’s the brightest thing I’ve seen all morning . . . .

Alright there soldier boy, (she says) want me to play with your rifle?

A man, my father’s age lurches into me and right in my face, says,

‘Why don’t you fuck off to your own country you Black & Tan fucking British bastard!’

But I didn’t say that. I walked on

While I was waiting outside the shop fronts I remember being scared for one of the only times in the province. An old lady told me to , ‘go home’ as she passed. It was all too surreal.

Our patrol took us past the Ardoyne shops. I remember waiting outside while Paul swapped taunts with the fish & chip shop owner. Then he told me to come in and we kicked open a door to the back of the shop where lookouts for the Provos often watched soldiers.

The Mash-Men (The mighty Argyll & Sutherland Highlanders) were patrolling in Andersonstown at the bottom of the Falls road when they heard contact, shots fired, a few streets away. When we got back to base I got the story from a jock corporal who was there. . .

He said, We heard the crack right and then about a minute later this fucking Patrick jumps out of a downstairs windey aboot 60 yds up Cavendish street, across the way from Laverty’s chemist, ya ken that? I said I did. Aye well, wee Eck’s up in front a’ us right and just as I see this guy jump out, I see he’s got an Armalite in his hand. I couldnae believe it. . what a fucking target right ‘cept he’s sa far away and the streets there are right narrow, ya ken, it’s just a jump atween the hooses there ken. So all in that split second, Eck’s dropped to his knee ken aimed and took him down just like that, fucking unbelievable right. One shot one kill ya cunt eh, eh!

A bit later this jock was killed and so were three of his mates north of Belfast.
The jocks had it so bad . . . . they lost their sense of humour.

You talk o’ better food for us, an’ schools, an’ fires, an’ all:
We’ll wait for extra rations if you treat us rational.
Don’t mess about the cook-room slops, but prove it to our face. 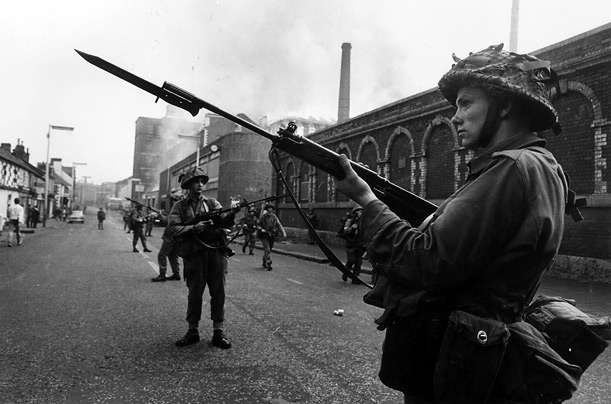