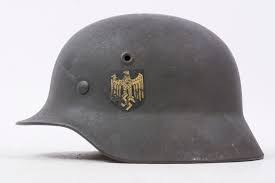 He is in an armchair and takes off his reading glasses, tics, lays his book in his lap; Bronowski’s, ‘The Ascent of Man’, and tells me about Germany 1945. There sit I, his luckless double, and listen again to the silence between his nonchalance.

I was on my way back to the regiment and when we got as far as Soltau we stopped for lunch on rising ground and watched a British unit about 5 miles away mopping up some SS Hitler Youth troops who were in a small wood. They were doing it with crocodile tanks that have flame throwers – didn’t half bring the buggers out of the wood a bit sharpish.

There was a railway line nearby with some burnt out wagons on it. I went for a leak and had a look into one of them and saw a British sixpenny piece inside. Then I saw a line of stakes going into the woods. Following them I came upon a big circle marked out in more wooden stakes, it was about 10yards across. The soil was fairly loose over the circle and all of a sudden I noticed a boot with a foot inside sticking out and then I found another. I yelled out and some of the others came over, among them a RSM.

I told him about the sixpenny piece and we went and found it. The RSM got on the wireless to the camp at Venlo on the Dutch border. An SIB (Army detectives) unit caught up with us at the next place we stopped. They took statements from us and promised to let us know what became of it. Later that day we were told the bodies were German civilians who had been shot by British planes on their way to a labour camp.

Years later I read that, Jewish prisoners on their way to a concentration camp were able to escape from a railway train that had been stopped in Soltau as the result of a British air attack. The prisoners were hunted down by an SS Hitler Youth regiment with the help of several townsfolk, and 92 of them were shot dead. There were trials after the war but they were all acquitted due to the lack of evidence. There is a monument there now. This event is sometime referred to as the Lost train.

As we pushed northeast we arrived at the German town of Tonning on the entrance and exit road to the Danish peninsula. Lovely little village with a big square and houses and shops all round it and two small bridges one out and the other back. The squadron was parked all round the square in front of the various shops and houses we were billeted in. nothing to do but wireless watch, maintenance and gun cleaning and washing and airing bedding as well of course. 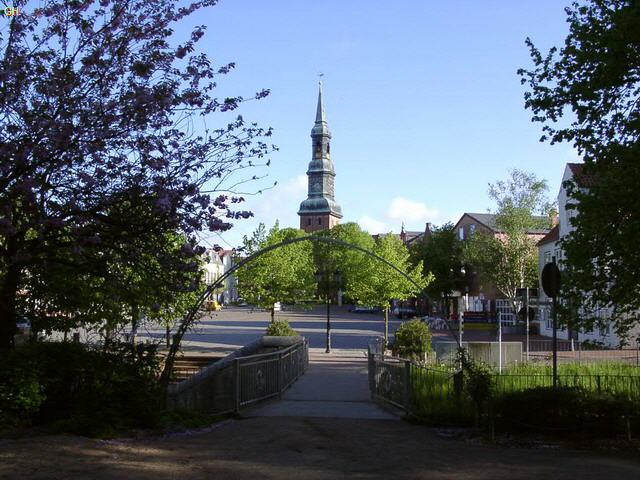 All the young ladies of the village, and there were quite a few, were out in the afternoons and evenings in the glorious sunshine strolling over one bridge and back over the other and round the square. If they did not mind walking we did not mind watching although we could not speak to them because of the ‘non-fraternisation’ order. 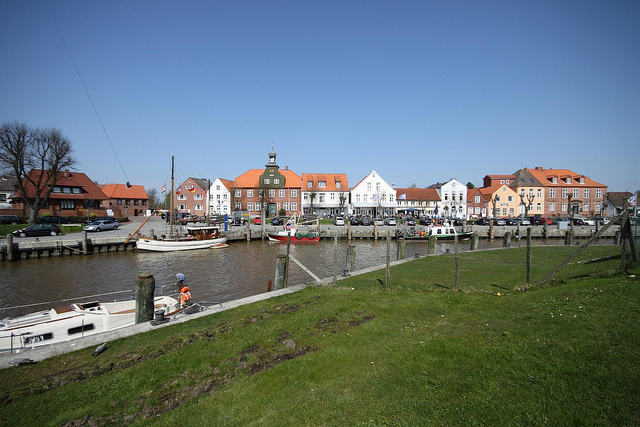 There was a lot of Russian POW’s on the peninsula, working on farms there. We had orders to ‘free’ them so went round with a lorry and interpreters and told them to be on the roadside the following morning to be picked up and returned to Russia.

When we arrived to collect them, hardly anyone was there. They had been running the farm with the wife and living as the husband as well in a lot of cases. They did not want anything to do with Russia, never been so well off in their lives. We had to forcibly manhandle lots of them on to the truck.

Of course we did not know of Uncle Joe Stalin’s policy of shooting all soldiers who had been captured by the Germans, even if it was only for a few days after being surrounded or overrun. We just piled them on the lorries and sent them off to a POW camp.

Also on the peninsula was a Kriegsmarine Barracks, which was empty, but due to be filled with a Kriegsmarine unit, who were like our Royal Marines, that was on its way to surrender to us.

They arrived in a few days and stopped a couple of miles out of the village to smarten up. They came into the village marching smartly and whistling and singing, really smart they were too, with their rifles at the slope. They stopped in the square and handed over their arms:

When Dad told me this part it reminded me of the German Commander speaking to his troops in the TV series, Band of brothers:

You’re a special group. You’ve found in one another

a bond that exists only in combat, among brothers.

You’ve shared foxholes and held each other in dire moments.

You’ve seen death and suffered together.

I’m proud to have served with each and every one of you.

You all deserve long and happy lives in peace.

They fell in again and marched smartly off to the barracks.

Next day we went round the peninsular again with interpreters and told all the women between the ages of 16 and 60 they were to be on the road in the morning, working on the principle of ‘if we can’t talk to them then neither can the Kriegsmarine’. I am not sure where we planned to take them.

When we went with the lorries next morning we found the bodies of dozens of women who had committed suicide. We had to drag the others screaming from their houses, even after the interpreters explained it was only temporary, they did not believe us.

I don’t know where they took them, we only loaded the lorries.

What we did not realise was they thought they were being taken to brothels.

We were there for a couple of weeks during which time the Kriegsmarine chaps cleared and repainted all our vehicles for us. They had got a bit scruffy. It cost us 40 fags a car which was good value. They were repainted after being steam cleaned, just the job. Really nice blokes they were as well. Only thing was the paint they had was battleship grey.